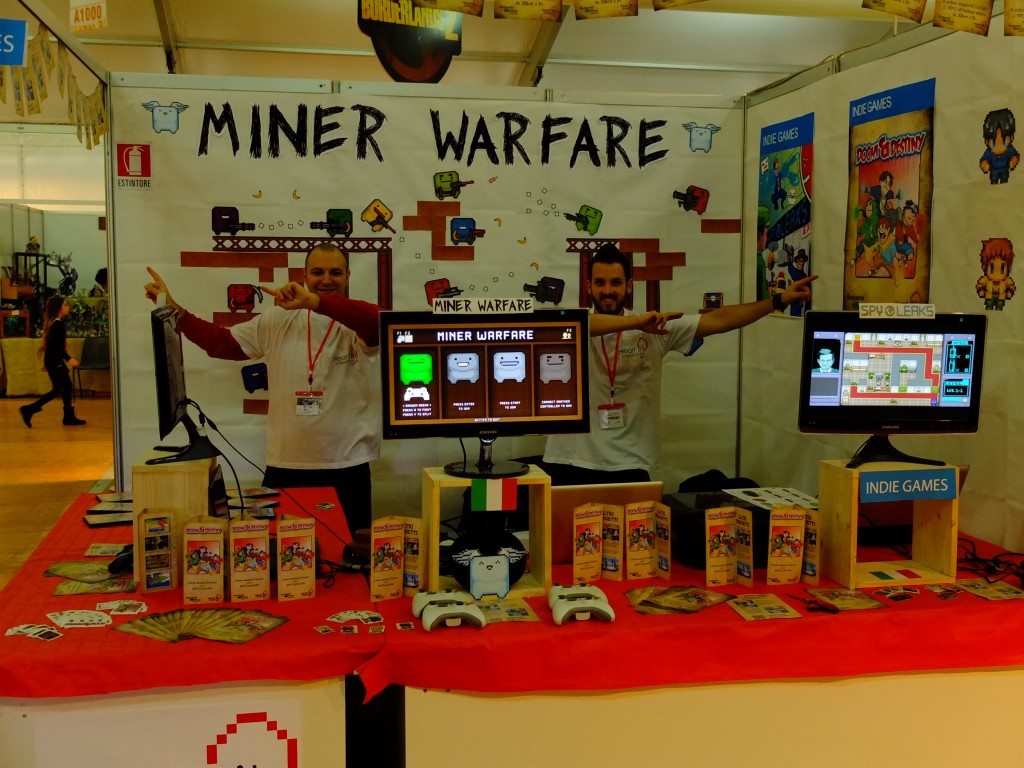 The newly formed studio Heartbit brings to Lucca Comix the fruits of its first year of work. In a celebration of big names and big numbers such as Sony, Nintendo and Ubisoft, at Lucca Comix and Games 2012 appears then new names and courageous young people: Francesco Ficarelli, Matteo Nicolotti and Gianluca Rossi occur with 4 games made entirely in Italy, able to entertain and excite even the veterans and the most demanding players: Doom & Destiny, Miner Warfare , SpyLeaks and Don’t Kill The LadyBug.

Doom & Destiny is a Spaghetti Fantasy with a nostalgic flavor, a role playing game that you do not expect nowadays. Set in a world which is a melting pot of environments known to fans, D&D tells the adventures of four nerdy friends who find themselves thrown into a world of castles, princesses in distress and evils to defeat.

Instantly familiar to fans of the old 16bit classics the game structure follows the first chapters of famous Japanese masterpiece Final Fantasy while the story does not spare ironic tributes to everything that is nerd culture of the present day.

Games like The Legend of Zelda or Super Mario and the fantasy sagas like The Lord of the Rings and InuYasha are celebrated in an ironic tone in a series of cameo and clichés that can not tear a smile to fans of the genre.

Doom & Destiny, after a year on the console market (in his incarnation for XBox 360), was presented completely revised and translated into Italian for PC Windows after the great success abroad (moret than 25,000 copies downloaded, 1st Ranked in Canada, 3rd in Italy, and 19th in the United States with more than 1,000 user votes) in a special limited edition, which includes in the same media the other two titles developed by Heartbeat: Miner Warfare and Spyleaks. 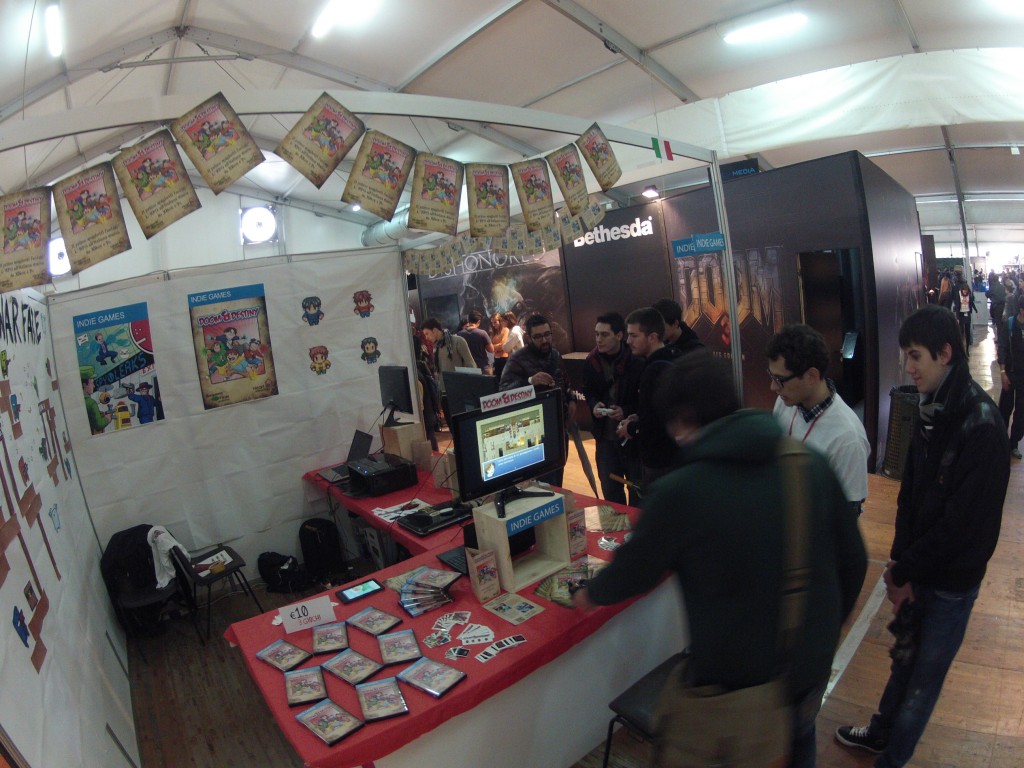 Miner Warfare is an immediate and fun multiplayer game that sees participants (up to 8 on the same PC) challenge to the sound of pickaxes and explosive bananas to acquire the largest amount of coins hidden in the level before time runs out.

In the four days of Lucca more than a thousand were the matches played on the three monitors available to the small but crowded stand. Many are the players who have returned to the Heartbit stand the next day to have fun with friends or why not, with the game developers, to share tips and insights.

For lovers of smart challenges the real deal was instead Spyleaks, a game that mixes its Noir setting with a modern Spy-Story vaguely inspired by the recent events of Jules Assange and his website Wikileaks. In Spyleaks the player must accompany Spy through a maze of 30 puzzle-rooms, avoiding the guards and the security systems of an evil criminal organization, to obtain the information that will ensure the wicked to justice.

The player will need to rely only on their intelligence and on the obstacles that the brave Spy can move to hide from the dangers that separate him from the central computer.

For those who travel a lot or want a challenging timekiller our team has shown for the first time to the public the app for phone and tablet D_K_L_B a.k.a. Do not Kill the Ladybug (available for free from October Lumia devices WP 7 and soon on Android and IPhone / IPad). 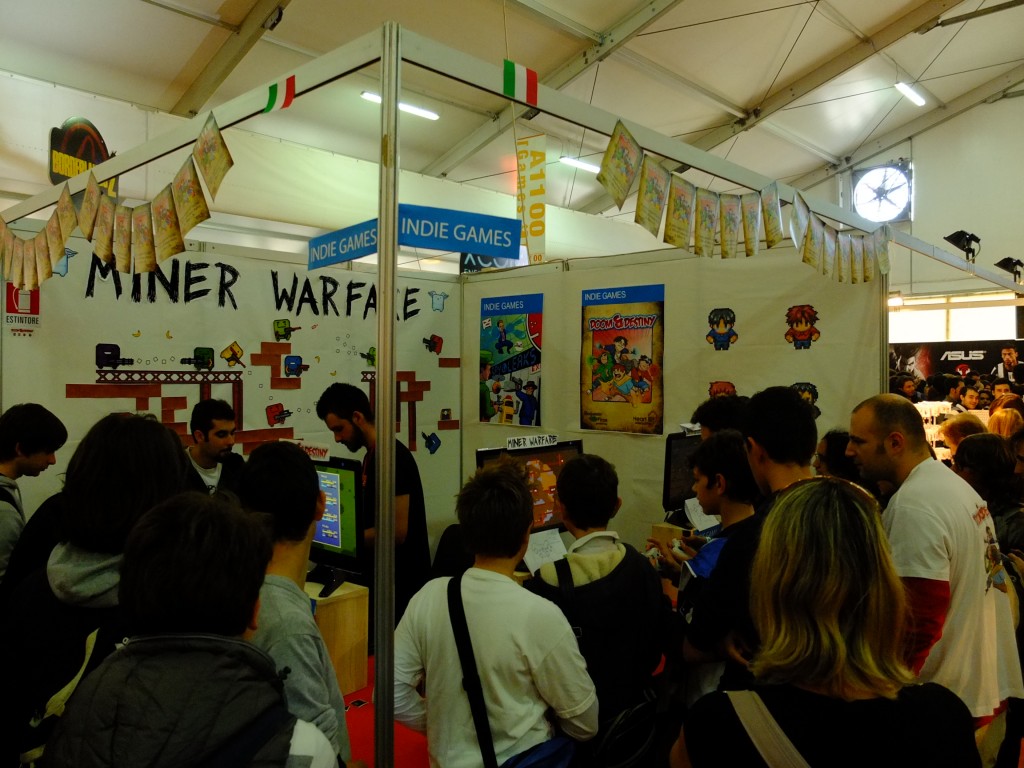 In D_K_L_B you have to protect your lunch from a colony of ravenous virtual insects. We can tap or swipe one or more fingers on the screen to eliminate the insects, while trying to combine a series of killings to earn combos and score the most points to climb the leaderboards.

Given the great success of the event we are hoping to repeat the experience next year perhaps counting on the presence of the many other Indie studios on the peninsula and who knows even from abroad as well.